The Landstrom Sharkfin Plectrum is a design and function classic. 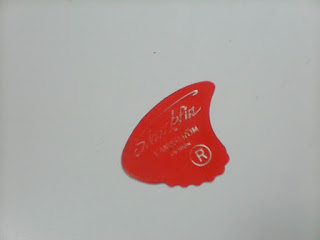 The red 'gold lettered' Landstrom is flexi, so it bends on impact allowing a much higher terminal speed than would normally be viable, so - however hard the strings are hit - a snapped string is pretty much a thing of the past. They 'dish' with use, very quickly changing shape to match the players' grip - so they don't twist round sideways or fly out of the hand at the wrong moment. There is no need to tape loads of them to the mic-stand. They don't break and are very slow to wear down. The three differently shaped sides give sound variation; the ridged edge is great for skidding down the strings. The 'raised-letter' version is not quite so thin, but is still flexi, so keeps the main design advantages. I've used Landstroms since the early eighties and every now and then I remember just how good they really are.
Never take anything for granted.
Posted by TheSpeedOfSoundUK at 23:33