Preview Review of the next single

It isn't out until 4th June, but we already have a review of the next single... giant thanks to Christopher Nosnibor and Aural Aggravation for covering it with so much enthusiasm and for really getting the concept of a proper single (which is one of the many things we like about Big Stir records too). 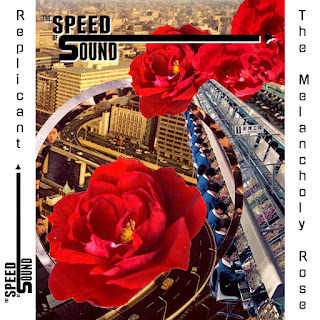 "Well here’s a wakeup: The Speed Of Sound are into their fourth decade, yet are so underground they’ve bypassed me all this time. I feel a certain sense of both guilt and shame for this. Obviously, no reviewer can know everything about every band going, but sometimes, a band will slip under the radar and leave you kicking yourself. The Speed Of Sound is one such band.

The fact they’re releasing a double A-side says something about their vintage. 7” singles may still be a thing, but they’re a niche, collector thing rather than the thing you’d experience as a youth. I was in my early teens – perhaps younger – when I’d go into town and visit WHS or Boots or perhaps Woolworths and pick up a 7” single for 99p, and the B-side would often be as integral a part of the experience as the A-side, while a AA sometimes meant the second A-side – the one less likely to be played on the radio – was the better one. Hearing it would be a revelation after you slipped it over the spindle and onto the turntable. It was a magical experience that words struggle to convey.

The two tracks on this release are thematically-linked in that they’re all about the band’s love for sci-fi soaked in reverb and with some hints of dappled sunlight mellowness.

The inspiration behind ‘Replicant’ probably requires little explanation as it draws the comparisons to the world of Bladerunner and the contemporary corporate world. Hearing Ann-Marie Crowley enunciate ‘Replicant’ calls to mind Johnny Rotten emphasis on ‘Pretty vacant’, but more than anything, the uptempo acoustic guitar that leads the track has a distinctly 90s indie flavour to it, and it jangles along nicely.

‘Melancholy Rose’ is a spacey indie-psychedelic folk effort with the jangle of the early 90s and some mellow shoegaze meanderings, sort of like The Fall covering The Charlatans. There are hints of sleepy, summery funk to the track, too.

Together, it makes for a nice single that does very much evoke the experience of yesteryear’s 7” purchase."

You can find the piece here:

Posted by TheSpeedOfSoundUK at 09:02 No comments: