Happy Birthday to Museum Of Tomorrow and A New Single... So, this is Birthday week for our Museum Of Tomorrow album and astoundingly it is still getting multiple daily radio play twelve months on from release, it really is incredible that it is still current - Radio TFSC in Germany placed one of the tracks in their current top 25 last week. Amazing. 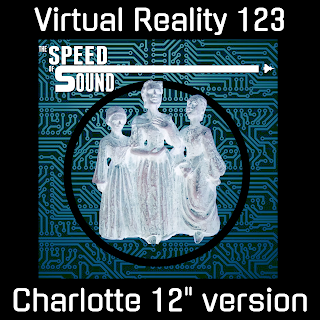 And: To mark the anniversary we have a new release!

A double A-sided single with the full version of Virtual Reality (the album of course contains only 'Part 2') and an extended version of Charlotte, both tracks are well over six minutes and simply wouldn't fit on the vinyl LP so they form an appendix to the album and are what a 12" single used to be.

Release day is Friday 16th September. So get your fill of Future Retro Modernism over on Big Stir Records bandcamp page: https://bigstirrecords.bandcamp.com/album/double-a-extended-12-single or take your pick of streaming platform here: https://orcd.co/thespeedofsound-doublea

Posted by TheSpeedOfSoundUK at 19:29 No comments:

The Day The Earth Caught Fire

Vive Le Rock Magazine has premiered our newest video release, The Day The Earth Caught Fire from Museum Of Tomorrow... and you can find it here: https://vivelerock.net/this-planets-on-fire/

"...Manchester sonic explorers THE SPEED OF SOUND have a brand new video which they’re premiering with Vive Le Rock!

‘The Day The Earth Caught Fire’ is taken from the band’s acclaimed album Museum Of Tomorrow, described by us as ‘unique and other-worldly’ and out now through Big Stir Records.

“A swagger borne of artistic confidence as wah-wah guitar lines blend with the rotating speakers of the organ leading into a bouncing infectious chorus, driven forward by the always propulsive rhythm section,” say the band. “Written while wild moorland fires raged in the hills around their native Manchester, The Day The Earth Caught Fire mixes the man-made horrors of climate malfunction with a joyous wake up call, encased within an alternative rock dance-anthem. All achieved while unloading The Speed Of Sound’s characteristic lyrical satire and wit against both those that party as the planet burns and those unable (or unwilling) to see beyond their own narrow field of vision. The video mixes allegorical volcanic eruptions with the pervading global adhesion to raw economics and untamed greed.”..."

Posted by TheSpeedOfSoundUK at 09:25 No comments:

Museum Of Tomorrow has a full page review and very enthusiastic feature in the new edition of Blitzed Magazine, this is doubly impressive as it is now 9 months since release and that is well outside the normal window of interest form the music press. Giant thanks to the team at Blitzed for their support. You can get a copy here, and the album is here (but can also be ordered in any record shop in The UK US and Canada) 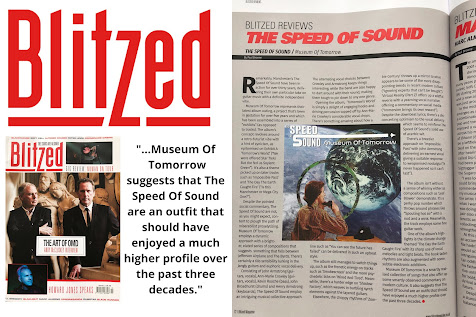 It is nice when people 'really get' what you do, and that final paragraph is extra cool having been largely ignored for over thirty years...

Posted by TheSpeedOfSoundUK at 19:06 No comments:

Pittsburgh PA based Second Scene Magazine has its eleventh print edition out now, and along with a lot of interesting pieces there is an in depth double page feature interview with John A. There is a digital version which you can pick up here or you can order the print edition here. 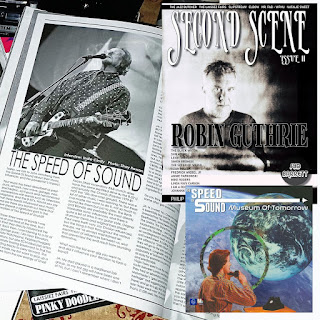 We also get a mention on the front cover which is nice. Giant thanks to Indy Cindy for the interview and to Second Scene for putting it into print. The magazine is stocked in record shops around the world but - as with everything else creative - buying direct is best. The link to the print edition above is with Psychdaisies Records which is an offshoot of Second Scene itself so you'd be buying it from the same entity.
It is fabulous that six months on from the Museum Of Tomorrow album campaign it is still getting press attention and masses of radio airplay.

Posted by TheSpeedOfSoundUK at 17:04 No comments:

Blood Sweat And Tears of psychnauts

A video premiere for Blood Sweat And Tears from Museum Of Tomorrow within the webpages of Vive Le Rock! magazine:

Apparently we are psychnauts, which sounds cool... click the image to go to the article... 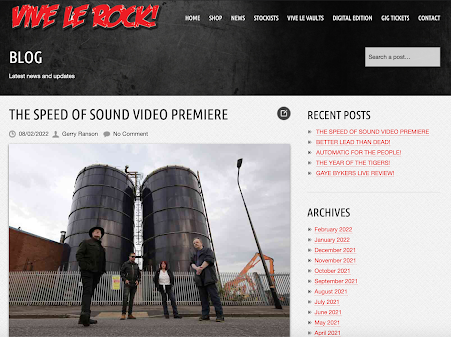 Thanks to Gerry Ranson for the write up and for Vive Le Rock! for taking an interest in independent music, and not just pushing the corporate feed.

Posted by TheSpeedOfSoundUK at 16:16 No comments:

So far there have been 84 reviews/features on Museum Of Tomorrow in printed press and the web, far too many to keep unto date with here: the website does that much better, but the Record Collector one s worth making a fuss about, and it is here:

and this is the Easy Read version: 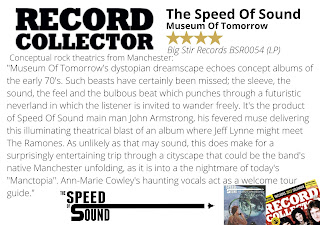 We're pretty damn pleased with that.
The Reviews & Press page on the website is the best place to see the response Museum Of Tomorrow has received - here: https://thespeedofsounduk.com/reviews-press
Posted by TheSpeedOfSoundUK at 22:26 No comments:

Email ThisBlogThis!Share to TwitterShare to FacebookShare to Pinterest
Labels: album review, museum of tomorrow, record collector, the speed of sound

The One Click To Everywhere Link for Museum Of Tomorrow; stream, digital or physical (vinyl or CD) this is the link:

Click on the image to go to the page.
Everything is there.
One click.
One link.
One place.
Posted by TheSpeedOfSoundUK at 21:53 No comments: