The dark nights are already shortening and eyes turn to the coming year. Thanks for your support over the last twelve months, we've got moving and achieved a lot; finally releasing the Everything Changes album and receiving a 9.5/10 review for it in Sounds Magazine has been a fulfilling experience. 2017 looks pretty exciting from here too, with more video planned and a bunch of gigs waiting for the dates to be nailed down, plus a huge triple-header gig in July, and as always new songs in the pipe. The album is available on bandcamp here We hope to see you out there in '17. 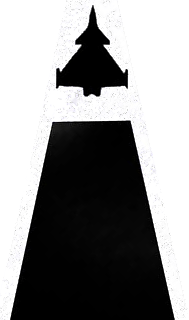 Wrapping up the years live appearances were gig numbers 52 and 53
December 18th at the Thirsty Scholar set list: 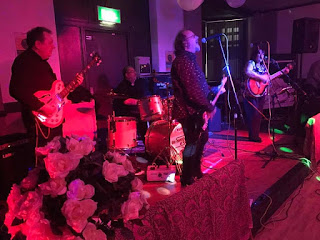 Whatcha Gonna Do About It
Checkered Land
Substitute
Girl On The Roof
Nothing But A Heartache
Only Everything
The Moment Is Now
Seen It All Before
Walk On By
Karin B
Shut All The Clubs
Poison Ivy
There's No One There
Brand New Cadillac
Crash
Venus
Posted by TheSpeedOfSoundUK at 20:00 No comments:

Email ThisBlogThis!Share to TwitterShare to FacebookShare to Pinterest
Labels: 2016, everything changes, the speed of sound

Sounds on The Speed Of Sound

Everything Changes is a big album, so it's quite a big review...
Mick Middles writing in Sounds : 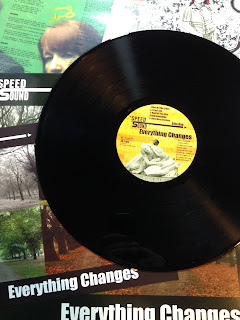 Gorgeous product this, especially in vinyl format, where the main affair is accompanied by an additional 10 song CD. Essentially therefore, that rare beast, the ‘double’ album and a most intriguing one at that. Fear not, this is no ‘Frampton Comes Alive’ where the entire career hinges on a gimmick-laden, video friendly head-bug of a song. Although bugs do abound and kind of twist your brain with repeated plays, offering visions of, I guess, Whalley Range or thereabouts. The beautiful cover features four photographic tints of what looks like a Manchester Park with a stunning marble sculpture on the reverse. There is more, a lyric heavy inner-sleeve neatly overlays un-doctored images of the band who also appear cartoon-esque on a separate sheet and – more more, again – a neat A4 glossy poster. I doapologise if this initial talk of packaging might seem rather crass, but I mean no disrespect. What is important here is that the parade of artwork and extraordinary care that is built into it reflects the equal care embedded in the music.

And there IS care there, too. This is a band fully deserving of the term ‘underground’ in the ancient sense. For the entire affair dips below any conceivable radar and apparently, they are a band assembled from numerous others – including the equally extraordinary Poppycock – and have punched their weight down and through the decades. The main focus of their recording ethos is ‘first-take effect’, where initial magic is captured in favour of superior polish. Not that you would notice, for this is far from Lo-Fi. 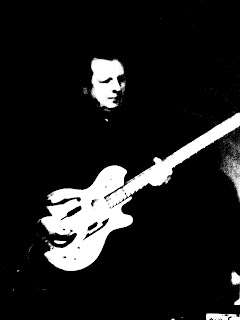 What I particularly like about this album is the unlikely relationship between the languid New York style vocals of songwriter John Armstrong and the infectious evocative bass of Kevin Roache. It's a marriage that governs the album, recalling - for me at least - a rather bizarre cocktail of Television/Only Ones /Henry Cow and, when when Ann-Marie Crowley's vocals kick in, touches of 'Meet On The Ledge' circa Fairport. The Comparisons might seem lazy but, from this is precisely where the album sits -, oh perhaps elements of off-kilter John Martyn. Maybe—maybe, definitely.

I mention the latter for a curious and possibly ironic reason. For John Martyn, as ungainly and openly macho as any musician could be, provides the haunting of this exceptional album—from start to finish. I am not suggesting that ‘Solid Air’ sits so effortlessly in the background—but. With ‘Everything Changes’, some kind of ghost is born.
Despite all this background, this is a contemporary urban album. Through and through, really and – although I have no idea where the individual musicians reside, there are elements of Chorlton Bohemia here. Again, this may appear derogative, but it isn’t, really. Track one, ‘Shut All The Clubs’ is a sincere response against the blanket regeneration of Manchester and, beyond that, the obvious close-down of lifestyles without consultation or consideration. We are left, adrift, in deadening satellite towns, bereft of the bonhomie of 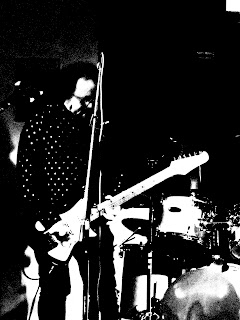 pubs and, in the city centre, the club culture that made the city thereat music extends from a stalwart socialistic heart. Rightly so and this filters defiantly through every song here. Indeed—of loss—loss and more loss, in social rather than romantic sense. This stuff flutters on local news every every evening of every week. Some of it PR puff. Some of it heartfelt. It doesn’t matter. It settles here and is openly recognisable, But there is more..much more—again and again. You can ignore and even disagree with all this background and simply groove. That is the true nature here. Kick-back and groove. Ignore the lyric sheet if you wish – it IS difficult to read, in truth and languish on the sofa, not unlike one of those advertising sloths from the DFS advert. Because, simply put, the music flows and soaks with delightful effect And boy does it!


Speaking as one who has spent the most part of 2016 hunting for actual songs on albums, famous and otherwise, it comes as an unexpected pleasure to something so effortlessly tune-heavy. Please don’t be paranoid, exotic bands of Manchester and beyond—I don’t mean you. Well possibly not. But here the songs carry more melodic twists than I have encountered in many years. All of them, if the sleeve is to be believed, scratched by the quill of John Armstrong although deftly augmented by a band who have been shuffling under the surface since 1989. An therein lies the key. It is now a long-term existence of a band lying so beyond the weakening tentacles of record companies, able to produce quality music and present it as a beautiful artifact without the need to tap into hazardous investment. This is how you do it.

So what do we get? The band’s website refers to the music as ‘atmospheric independent’ although that’s far too vague a tag and one that hints at the kind of psyche punched across by the skillful Gnod. But this is a truly different kettle— there lies a maturity within that – I may be wrong, they might bicker like a pack full of Scotties – seems to seep sweetly beyond he curt snap of musicianly ego. This reflects in the aforementioned member of Poppycock, 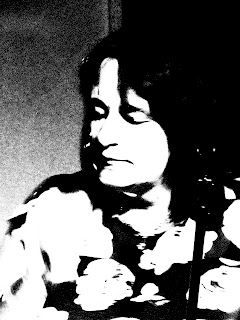 Ann Marie Crowley – a busy professional person shunting through a frenetic life – juggling life in two bands. This she achieves with a palpable sense of serenity. Poppycock live always remind me of distant grainy films of Pentangle, a band so lost to heavenly musicality. Well this is the atmosphere on ‘Everything Changes’ (The title being the least effective aspect of the entire package).

20 songs is a lot to take. More than most bands manage in a lifetime and yet, even deep into the extra disc – this being a multi-media affair, the atmosphere continues to push through. I don’t know quite how the sleeve is intended to relate to the music—.although it does. These are Autumnal strolls in Manchester park songs, spiced by that Television or Only Ones drawl. I admit, I am a pure sucker for such vocals and, somehow, the distance from ‘Speed of Sound ‘from any kind or record company or showbiz unreality serves to heighten the effect. Hype is peeled away. The youthful illusion of stardom is not allowed to feature. These are mature people who do not feel the need to exist in the minds of people they don’t know. I scan through the lyrics provided on 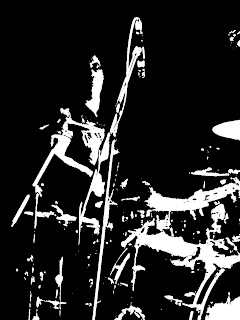 the inner sheet. There is an element, perhaps, of the blissful existentialism of ageing. Of moving away from the pulse-beat, of drifting thoughtfully. One thinks, maybe, of Dylan’s ‘Not Dark Yet’, of a fully thirty years of Cohen or, more locally, the ‘End of the Pier’ outpourings of The Distractions. This is the punk reflective. This is a valuable album for that, and more. For I know, I am parallel age, parallel feelings. How this might filter down to youth, I have no idea. The point is. Let the songs flow and enjoy them in the most uncomplicated manner and, to drag up seventies terminology, uncommercial way. Nothing matters. Look to the inner sleeve and scan the faces of this extraordinary band. Ghostly as they are. Even this is a shape-shifting moment. Ann Marie, dark and distant. John Armstrong, looking like the jazz musician of your dreams, glancing to the left—his left. Paul Worthington and Kevin Roache, somewhat shifty. It all combines to form a wry parody of the presentable pop persona. Times have changed and here, now it feels all the better for it.

The link is here:
http://soundsmagazine.co.uk/the-speed-of-sound-everything-changes-double-cd/
Posted by TheSpeedOfSoundUK at 21:53 No comments:

No fanfare or overblown hype, just a simple statement: the album is released today.
You can get the digital version everywhere you would expect to find it and the physical version at https://thespeedofsound.bandcamp.com/album/everything-changes and at gigs.
No separate label, no corporate control, just real music made by real people.
Radio play has been racking up with multiple plays in Berlin, California, Florida, Gothenburg, Liverpool, Manchester, Salford, Seattle, Stockport, Stoke-on-Trent and more to come
Support the independents and buy some real music.

Following the epic 26th November gig, on Friday 2nd December we played a loud and immensely enjoyable birthday party supported by Kill Pretty and Elevator Lady, we're back live with Kill Pretty again on 10th in Warrington, then on 18th at the Thirsty Scholar with support from Weimar and 22nd we're in Blackburn seeing in the New Solar Year.

Set list from 2nd December:
I'm Real
Sit By The River
Maid Of The Grey
Day In Day Out
The Moment Is Now
Seen It All Before
Girl On The Roof
I Can't Say
Only Everything
Love
Shut All The Clubs

and... we're RockAtNight.com's Band of the Month with an interview feature to go with it
Posted by TheSpeedOfSoundUK at 13:54 No comments: