January What's The Alternative in The News

Reject corporate pop and revel in true independence.
Salford chanteuse Turner is ear catching, eye catching and described as "One to watch" in John Robb's Louder Than War website; Turner invites you to sample her excellence in wistful melancholic joy.
Meanwhile Manchester's The Speed Of Sound continue to ply their original music that manages to cross the Velvet Underground with The Jam and Neil Young with Siouxsie & The Banshees in their own idiosyncratic manner.
Live from 9pm
With DJ after the live music continuing til late
£7 (£4 concessions) 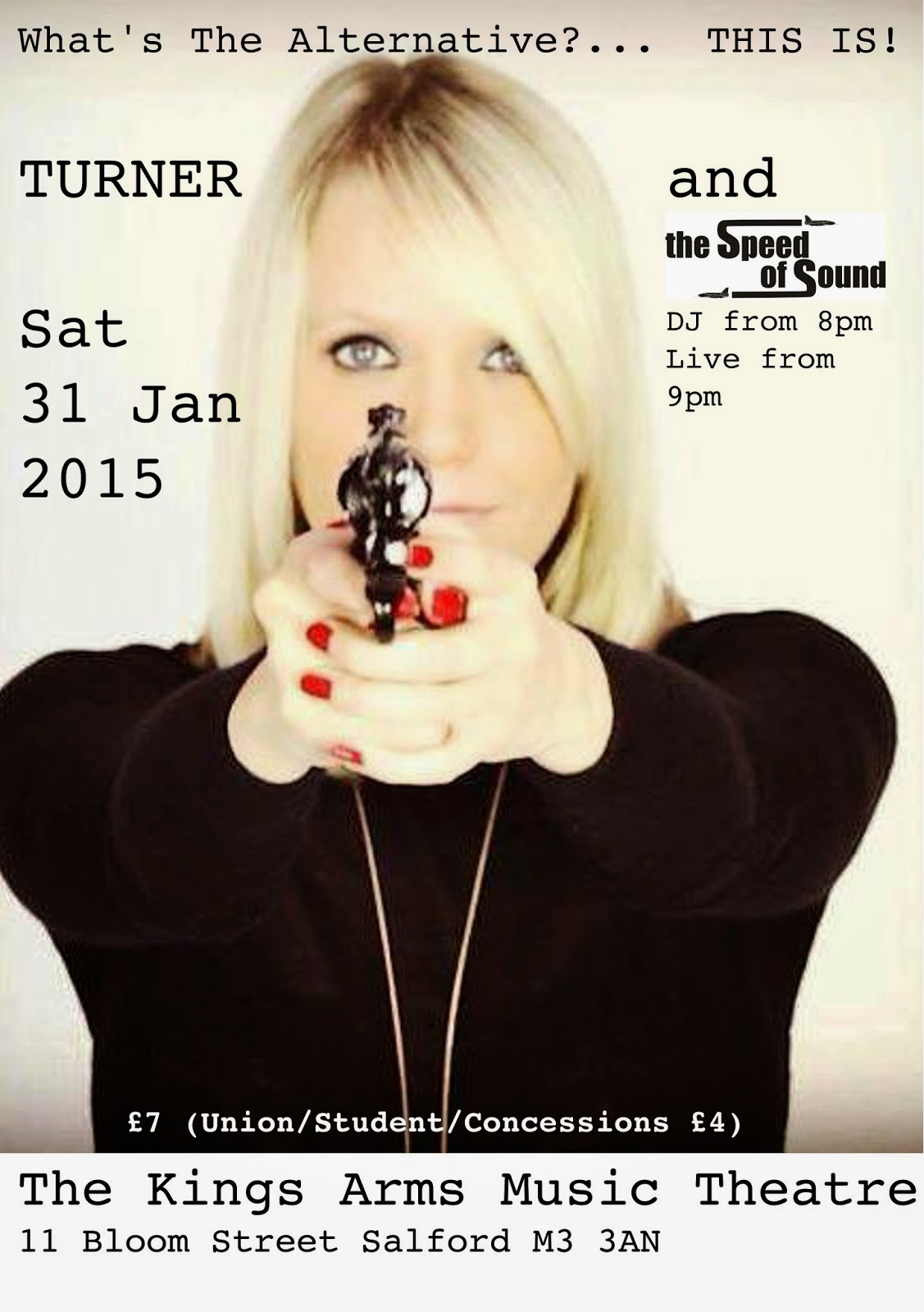 Turner: This is Turner... Born and bred in Audenshaw Tameside, Turner was introduced to the world with music coursing through her veins & even as a young girl was spoon-fed delicious melody's from the greats such as Dusty Springfield, Scott Walker, Blondie, The Beach Boys to name but a few!
After moving up the road to Salford & a chance meeting with Guy Garvey at a recording studio Louise was asked to appear on the Mercury Prize-winning & platinum-selling album 'The Seldom Seen Kid' with Elbow from then on Turner made many Manchester connections with even Peter Hook asking to jam sometime!
Salford-based Louise then teamed up with the successful "Art&Soul" band DC Fontana from 2012-2013 and enjoyed a busy action packed year gigging around the country, appearing at numerous venues including the 100 Club London and Euro YeYe festival in Spain and receiving fantastic reviews for the bands EP Pentagram Man which was produced by Julian Cope's Guitarist Donald Ross Skinner & working closely with 60's legend Don Fardon.
She already enjoys a successful career as an in-demand session singer...& with a string of collaborations and guest appearances on tunes featuring Primal Scream's Denise Johnson, Manc Poet and songwriter Edward Barton, Bluebird Kid Clark & The Electric Stars.
Indeed, her crystalize vocals and powerful lungs have appeared on numerous records but despite her prowess as a much sought-after studio singer this Salford Chanteuse decided to step out on her own with her debut Minin Album This Is Turner.
Turner has had an action packed 2014 building her platform and becoming the first female solo artist to sign with respected indie label Detour Records.
The 6 track album was produced by another respected Manchester face - Yves Altana (The Chameleons/I Am Kloot/Mark Burgess) and showcases the many sides of Turner, all part of her vintage charm, one minute classic Dusty, the next epic Scott Walker style ballads & just for good measure a track that could easily fit into the next Bond Film.
Ear catching, eye catching and described as 'One to watch' in John Robb's Louder Than War Turner invites you to sample her excellence in wistful melancholic joy.
www.thisisturner.com
www.facebook.com/thisisturner.com
www.youtube.com/turnerfilm
www.twitter.com/turnersalford
"Turner is one to watch out for" - LOUDER THAN WAR
"With her platinum bob, panda kohl eyes and expressive voice... Part Dusty/Part Debbie Harry, she's very adaptable to many styles and sounds" - NO OTHER PRESS
"This is Turner! And Ladies & Gentlemen, we should be glad, For here is an artist who is far more than a singer songwriter. Turner is an icon in waiting. She is totally out of step with the mass produced, unit shifting pop of today and that Music Lovers is a good thing ! Turner's songs are dripping in melody & emotion. Lyrically she can be both disturbing and mysterious, without ever losing her knack for a killer hook. Her 2013 take  on bohemian suss, make her the perfect antidote to the TV conveyor belt of shame !" - TONY SALT (Manchester Underground Scene)
The Speed Of Sound:  Purveyors of original independent Manchester music since 1989 with various lineup changes along the way but always retaining the same guitar/vocal combination of founder John Armstrong, Kevin Roache is the bands longest serving bass player and the pair are now joined by 18 year old powerhouse drummer Owen Deane.
"A cool mix of punk and The Byrds 5th Dimension LP" - LORD LITTER Radio DJ Berlin Germany
"Have you ever wondered what it would be like to hear a erger between Jimi Hendrix, The Rolling Stones and Lou Reed?... The vocals are dark and melancholy - they have an intense quality that makes me stop everything I'm doing and just listen. The music surrounding the words pulls me along like a tide, making me drift away from reality without feeling that I have an option" MUSICVSTHEWORLD BLOG
"Quite a modern folk rock feel with a definite dash of 80's post punk/alt thrown in... vocally there is a hint of Lou Reed, Iggy Pop, bit of Jagger, great sound. Musically the sound alternates between Rock; verging on heavy/psych to alt/punk with some great instrumentation along the way." MADFERRETS MUSICBLOG
http://www.reverbnation.com/thespeedofsound
http://thespeedofsound.bandcamp.com/
Posted by TheSpeedOfSoundUK at 19:07 No comments:

sneak-peek at the new video

Happy new calendar year and if you had seasonal festivities we hope they went well. We're getting 2015 underway with some editing; it's a change for us as its the first video we haven't done ourselves, our own technology didn't let us do what we wanted on this, so we had a chat with Music Videos Manchester, and Alistair has been very helpful. Today was the second editing session and we expect it'll be all wrapped in another one or two bursts. It's exciting to be working with Natalie Paddick from NMPE Style on this too her photographic images are really dynamic and fit superbly.
(See her website)
Here's a sneak-peek image taken this afternoon: 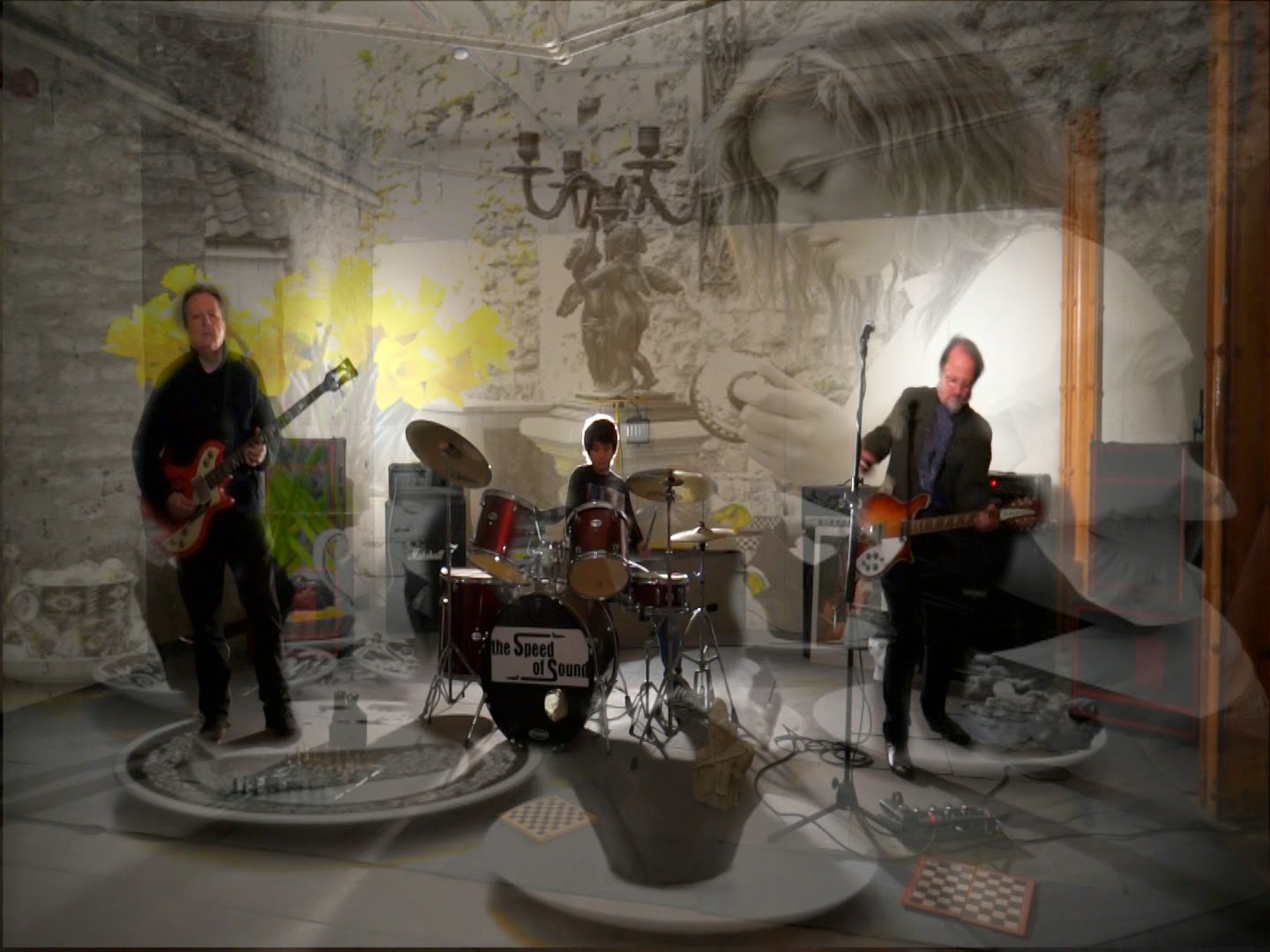 Posted by TheSpeedOfSoundUK at 18:25 No comments: