We can now reveal that Karin B from our Everything Changes album features on the new compilation from Aldora Britain Records. Snappily titled Everybody's Out There Doing Nothin'New (It Doesn't Matter To Me) and you can get the entire compilation from the Bandcamp shop for £1.60 here 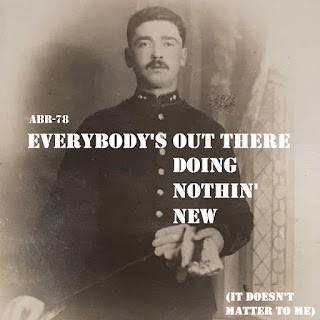 And why wouldn't you at that price.
Exciting to be involved. Click the link above for full track listing and of course you can stream it on Bandcamp too.

Posted by TheSpeedOfSoundUK at 18:30 No comments:

Email ThisBlogThis!Share to TwitterShare to FacebookShare to Pinterest
Labels: Aldora Britain Records, compilation album, Karin B, the speed of sound

Wow! ...that is quite a review

Yes. Needed a cup of tea and a sit down after reading this - Mick Middles writing in the printed Fall Edition of Rock at Night which has the theme of 'Revolution'... Here we go:

"Of all the angles, colours, shades, clouts clangs and dances that have given life to Manchester music since the advent of punk, none have felt or tasted quite the same as The Speed Of Sound. With a history over 30 years deep and a smattering of musicians adding up to - and beyond - 18, Speed Of Sound have remained a vibrant scream from the Manchester shadows.

It HAS to be a scream, too, at times literally so, for this perennial Manchester outsider band. Now deep into middle age, the lovely intelligent and softly spoken people who take refuge within this band explode into life when their feet hit the stage. 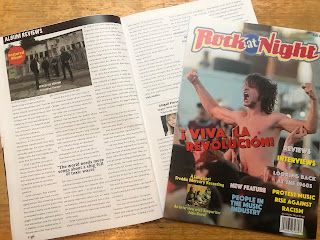 I recall a gig three years ago at Manchester's funky-if-not-downbeat Thirsty Scholar. Sitting chatting within the wicker-lined interior, we chatted as they unpacked their gear, carefully lying their guitars to rest before studiously replying to my measured questions.

As the set began, they instantly transformed into some kind of weird raging torrent. John Armstrong slashing an arm viciously across his guitar while Ann-Marie Crowley vocals howled as an untamed banshee. I swear that a gaggle of attendees, seasoned punks to man and woman took two steps back in disbelief. In that modest arena, it became one of the most spectacular gigs I had witnessed for decades.

Around that time, I received a copy of their sumptuous double album, Everything Changes. It proved to be  a gorgeous product, this, especially in vinyl format, where the main affair was accompanied by an additional 10 song CD.Essentially therefore, that rare beast, the 'double album' and a most intriguing one at that. Fear not, this is no Frampton Comes Alive where the entire career hinges on a gimmick-laden, video friendly head bug of a song. Although bugs do abound and kind of twist your brain with repeated plays, offering visions of, I guess, Whalley Range or thereabouts.

The beautiful cover features four photographic tints of what looks like a Manchester park and a stunning marble statue on the reverse. There is more: A lyric-heavy inner-sleeve neatly overlays undoctored images of the band who also appear cartoon-esque on a separate sheet and - more, more again - a neat A4 glossy poster insert. I do apologise if this initial talk of packaging might seem rather crass,  as I mean no disrespect. What is important here is that the parade of artwork and extraordinary care built into it reflects the equal care embedded in the music.

What I particularly adored about this album is the unlikely relationship between the languid New York style vocals of songwriter John. Armstrong and the infectious evocative bass of Kevin Roache. It is a marriage that governs the album recalling - for me at least - a rather bizarre cocktail of Television / The Only Ones, Henry Crow and, when Ann-Marie Crowley's vocals kick in, touches of 'Meet On The Ledge' circa Fairport. The comparisons might seem lazy, but this is precisely where the album sits...oh, perhaps with elements of off-kilter John Marty. Maybe...maybe, definitely. 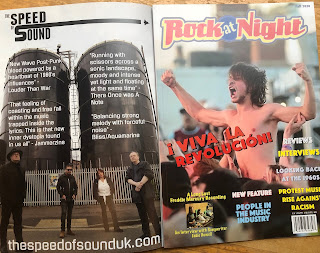 In 2018, there followed a further extraordinary slap of vinyl. A single this time, in support of Manchester Women's Aid. A double-A-side of two songs "I'm Real" and " I Don't Want Your Attentions", both ferociously exploding with feministic intent... and both written by John Armstrong. While the song titles may seem self explanatory, the jagged edges of the lyric certainly snagged on unexpected territory. "I won't put up with this anymore you've pushed me near the edge, every time I see you I want to get away, I just wish you were dead."

John Armstrong is an enigma; Perhaps Manchester's greatest, squealing form under the floorboards. Interviewing him is, itself, a curiously beguiling task.

I ask him about his writing... he replies: "There's a literary approach in my writing, partly because of writing about actual things rather than generic stuff. There are enough people writing predictable pop songs already. We need more songs about a ship full of toxic waste or a mannequin tied to a pub roof or the ring road in Rio de Janeiro. I am trying to find something that interests me. Something that won't be boring in ten years". As carefully posed question...are Speed Of Sound comfortable with being tagged 'outsiders'? "Very much Outsiders." He replies. "We are not interested in the music business, labels fashions and trends and didn't start making music to end up of the cover of Smash Hits or being a major label signing. All this people who have played with The Speed Of Sound over the decades make music because this is what they do. The industry is about 'product'. The sound, the textures is irrelevant to record companies. Whereas we are simply doing it for the music which is the other way around to the mainstream. Doing it our way gives us a level of artistic control that is impossible in the major label world. I am happy with that."

A new album edges towards completion. Themes will edge towards sci-fi in a typically off-kilter manner. Shots will emerge before the album release, in Spring 2021, in the form of planned singles. But of course, this being 2020, nothing is ever going to be nailed onto anything. This is the uncertain world in which we live.

Bu Speed Of Sound remain elegantly adrift, from anything and everything." 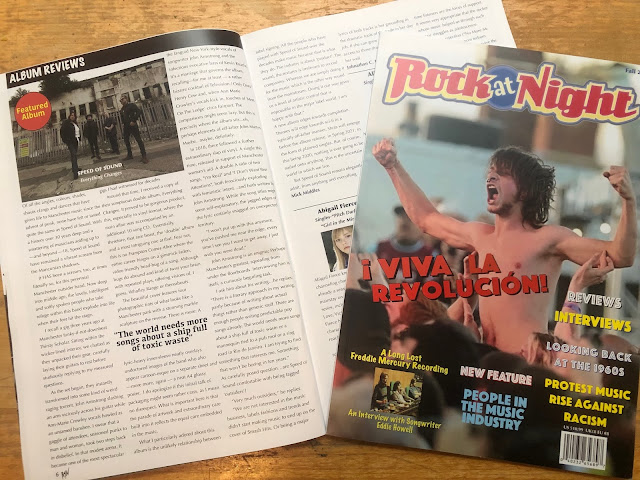 Posted by TheSpeedOfSoundUK at 16:43 No comments: