2018 has been interesting. 100 years to the day since the first women voted (and stood as candidates) in a British general election a statue of Emmeline Pankhurst was unveiled in her home city Manchester. Only the second statue of a woman there and the first for 117 years and; as the other one is Queen Victoria and it took all 66years of her reign to get round to putting hers up it is quite an achievement for Emmeline to join her. 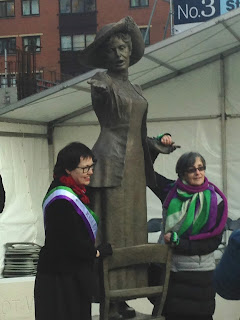 It was a great pleasure to be able to attend the unveiling and to join the march from The Pankhurst Trust - her former home and birth place of the WPSU - and greet her return to Manchester in person. There is still a long way to go for gender equality, it is not over. The Pankhurst Trust carry on into the 21st Century and do tremendous work supporting victims of domestic violence and gender equality. Which is why the single issued this year is in aid of The Pankhurst Trust. Buy it, stream it, play it, sing it, whatever, you will be supporting social progress. There were 20 possible women on the list - one of whom is novelist Elizabeth Gaskell, whose house has a The Speed Of Sound connection as we have played a gig there. It would be nice to get the other 19 statues up as well.